The lead character of my book is female, and a mother besides. One of the book's primary supporting characters is also a woman. Again, a mother, though in this case a mother-to-be. In theory, a male perspective on the issues they experience will be distant and irrelevant, but in the same book that I tackle the powerful emotions and conflicts of motherhood, I also write a romantic male foil and a father character. These characters not only have gender, but their actions are steeped in a deep understanding of their gendered roles: those of mother and father, husband and wife.

Whether or not I did a good job representing these roles is for my readers and reviewers to say. But my willingness to do so and the bold disregard with which I dove into these roles is apparently an aberration. I've heard it said that men do not write proper female characters and women do not write proper male characters. I've attended critique groups in which a writer passes on the chance to render advice to a writer of the opposite gender because they "know" that men and women think differently. Consider this in light of the SFWA's recent drama concerning its treatment of female writers and characters, and the popular support for Lightspeed Magazine's Women Destroy Science Fiction Kickstarter campaign. 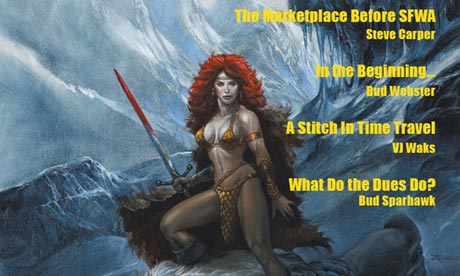 A realistic depiction of protective armor which doubles as effective insulation
against the frigid winds of the frozen wastelands. And stuff.
(source)

I would challenge that it is also because male writers for some reason boast a series of nigh misogynistic assumptions about what it means to write a female character. In the same breath, I've noticed women feel unable to write realistic male characters. The latter problem isn't causing such dramatic issues, but surely every writer wants every character to work, don't they?

Why would you believe this? It's true that men and women act differently, but this is based on differences in experience, sociology, economic wage gaps, whether they were raised with building blocks or barbies, whether they're expected to be six feet tall and broad or five feet tall and thin, and a hundred other issues that dynamically change the way in which they have to approach the world and the way the world treats them once they do. Men don't think differently than women, but they are expected to prioritize different thoughts and act on those thoughts in different ways, and of course they don't think about how and why they act the way they do. 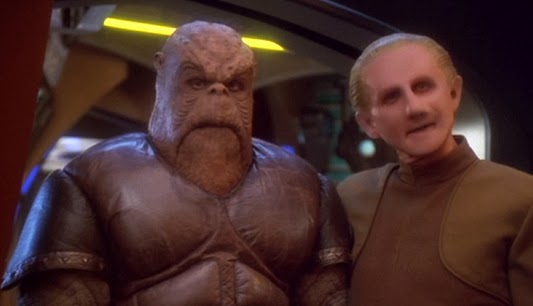 According to most writers, Morn and Odo have more in common with one another
than they do with females of their own species. A few million lightyears and eons of
evolutionary divergence is one thing, but gender? Insurmountable!

When you say that you think differently than the opposite gender, what you're actually saying is that you are failing to understand the feelings and motivations of a fellow human being just because their backstory is significantly different than your own. But haven't you written plenty of characters that are different than you are? Different upbringing, different home, different planet and society? If you can write two female characters, then you can write a male character just as well, as long as you get out of your own way and understand that the concept of gender is just a gathering of backstory elements. You just need to understand their biography, experiences, and role in society.

Lie two: I cannot understand the experiences and role of the other gender.

You liar. Have you ever, like, actually talked to a woman? And listened to her when she talked about woman stuff? Or did you just stop paying attention as soon as she mentioned a female celebrity that you don't like? Women (and men) exist in a world of issues and troubles that are unique to their gender, but completely within your ability to understand if you open yourself up to the fact that these are actual things that people care about for reasons. Feminism is a thing that lots of men actually do understand, and they aren't gifted with supernatural powers or the ability to telepathically hear women think strange woman thoughts; they listened to a woman, cared what she had to say, and accepted that rape culture and wage disparity are actually real things that exist. (protip: they are actual things that do exist.)

And men who lament the death of masculinity in America aren't just misogynists who think in grunts. A lot of them are, but some guys are too stupid to realize that masculinities are actually a thing, too, the same way that some women undermine feminism by just being stupid about it. And some guys are just afraid to acknowledge the studies of masculinities because it would mean acknowledging feminism, and those men are in an environment where they might be oppressed by their families, employers or peers if they profess that gender stratification might be kind of lame. Which women might notice is similar to the situation that an office-working female could encounter if she actually says something about wage discrimination in front of her boss.

If you didn't notice, I just gave you a snazzy key to relate a problem you have to a problem the opposite gender frequently encounters to the point that it's part of their every day life.

Here. For some of you I'm about to go way off the deep end. Some of you need to spend more time on Lies One and Two before you're ready for Lie Three. It took me years to ease into Lie Three (and some really well-written literature covering transgender issues), but I'm not going to ease anyone into it on this article. I'm not that graceful. Not today.

In an age where our understanding of gender is expanding and the society around us (Western society, anyway) is breaking down gender roles as much as possible, there's absolutely no reason I should even have to go over Lies One and Two. Male and female gender roles do exist and do have to be taken into account when writing about a society that resembles our realistic, present world (though if you want to construct a non-gendered society for your story, this is definitely the proper literary climate to do so), but your character does not have to obey them. Your male character can have a female backstory and your female character can have a male backstory, and male writers can fully comprehend and write about motherhood if they want. The character depicted could have been born "male", and may even still identify as male. You could never know
unless it becomes a plot point. We might as well give the giant robot a gender, if it bothers you.
(source)

Gender is useful; it really is, and some people are undeniably, specifically gendered from their very beginnings. But what we need to understand is that gender is a single attribute among many that make up a human being, and it is something that a writer should be in full control of. If you're writing a good, solid character -- a person, not a caricature -- then it is up to you how to treat their gender. Less masculine men are not suddenly feminine (though, once again, this is the proper literary climate for feminine men, especially feminine men concerned with their masculinities) any more than less feminine women are suddenly "butch" or "tomboys". Once you understand both genders (and all the genders that fall between), you can strip them away and pull back on them and present humans that have entirely different representations of gender, or maybe they are just less gendered. They can still be male and female in presentation, but there's enough variance in between and on either side that you could write for decades and never depict gender the same way twice. Not that you need to be invested in that, but understanding your tools is prerequisite.


Afterword
This article was obviously written to an audience of cis-gendered writers who are mired in their perceived rigidity of gender. All of the above is very surface-level, and if you found it all agreeable, I think you'll enjoy what I write. If you think there is more to be said about any of my points (and of course there is), then let's talk about that.
at 3:21 PM